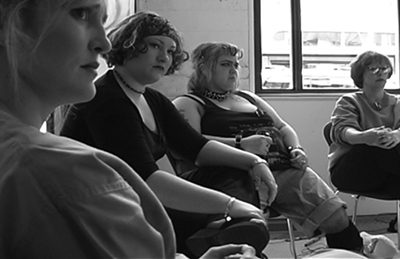 Get in touch with your anger!
– New York Times

Mastering its formidable arithmetic of cameras and souls, Group articulates a flood of emotion.
– The Village Voice

Released commercially in 2002 and 2003, “Group” was Wovie’s first feature film. It was shot in our Olympia studio on six Cannon XL1 digital video cameras, and the entire production was streamed live on the web. The intention was to tell a story in a totally unconventional way that stripped the illusions and the safe remove between artists and audiences and to maximize the transformative powers of storytelling at its best.

The cast was made up of actors and performers from across the country and included Carrie Brownstein, Lola Rock n’ Rolla, and Nomy Lamm. The movie’s punk rock soundtrack came straight out of the garages of Olympia, with songs by Sleater-Kinney, The Need and The Gossip.

“The most extraordinary thing about Group is the wholly believable and heart-wrenching depths of despair reached by the cast assembled by filmmakers and new-media artists Anne de Marcken and Marilyn Freeman.”
– Flick Filosopher

At the center challenging them all is Pipi, the fat one-legged punk walled up inside her own contradictions.  Orbiting closely are Clansey, the Christian confounded by her own condemning judgments, and Grace, the hypochondriac desperate to stay above the emotional fray.  In this microcosm of life wrought with prejudice, pettiness, and trauma, it%27s compassion that transcends all else with a level of reality rarely seen in fiction. Six simultaneous camera perspectives expand the story on screen with multiple frames and layered narratives.  Unforgettably funny at times and riveting to the final moment, GROUP delivers a fresh, powerful view of cinema and humanity.